Please wait, your selection is being loaded.

The item you selected is no longer available. 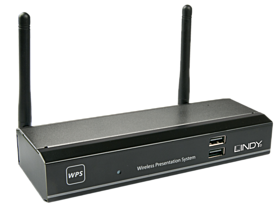 Not a business customer yet?

This product has been discontinued and replaced by Part No 32702.

The HDMI WIFI Projector Server allows one or more users to stream sound & images such as presentations, videos or simple sound files to a connected projector. This is done via WIFI, which all modern laptops and other mobile devices have. The projector server functions as a WIFI router and supports the IEEE 802.11b/g/n protocols. This makes it possible to present and surf at the same time- to play a video from the Internet for example.

HD Video and audio are sent to the connected device together via HDMI. Alternatively, the Projector Server offers a VGA and audio interface for older devices.

The Administrator can control the display and connection of individual computers. He/she does this via the website provided by the Projector Server. The resolution and split screen mode can be configured from here.

Thanks to its very simple installation, this device can be use right away. The software can be loaded in different ways. It can be loaded via the browser over an existing WIFI connection, from a CD or the supplied USB stick.

Up to four different video sources can be shown on-screen on a projector. This makes it possible to compare or monitor several things next to each other for example.

Mobile devices can also be connected to the projector server via an app, as well as the connection to a computer. iOS and Android are supported.

The USB interfaces attached to the front of the projector server are suitable for processing additional information from touchscreens or whiteboards, amongst other things. A mouse and keyboard can also be connected.